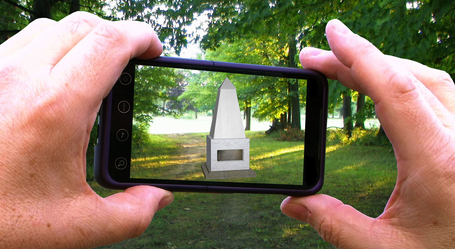 Description: Mapping Ararat is an augmented reality project that navigates through an imaginary Jewish homeland.  It offers the user/participant the tools to imagine an alternative historical outcome for Major Mordecai Noah’s plan to turn Grand Island, New York into Ararat, a city of refuge for the Jews during the 1820’s. Utilizing cutting-edge digital media technologies such as augmented reality and simulated cartography, this project gives Ararat a virtual chance to become the Jewish homeland that its founder had envisioned nearly two centuries ago. The project consists of an on-site augmented reality walking tour that haunts the contemporary landscape of Grand Island as well as an interactive cartographic landscape set up in a 3D virtual world within a gallery installation. In addition, Mapping Ararat generates the vernacular artifacts common to all modern nation-states whether money, postcards or newspapers.

The Critical Digital Humanities Initiative (CDHI) is pleased to announce new Fellowships in Critical Digital Humanities (DH) research to support qualified undergraduate students registered in any program at the University of Toronto. The program embeds undergraduate student researchers within existing critical digital humanities research projects at U of T. This call supports undergrad researchers for the period between Jan. 3, 2022 and April 30, 2022. Applications are due December 10, 2021.

END_OF_DOCUMENT_TOKEN_TO_BE_REPLACED

The Digital Humanities Learning Community Grant is a grant of up to $2000 offered in support of groups of four or more individuals co-working towards specific digital humanities research during the Winter and Spring 2022 semesters. Applications are due December 10, 2021.